How the Designer, Contractor and End User Can Plan Together to Create Award Winning Healthcare Space

Everyone is familiar with the old saying an ounce of prevention is better than a pound of cure. This old adage can be applied during the planning and design stage of a project to improve staff workflow and ultimately improve patient care.  Doster recently completed the Whitaker Clinic of UAB Hospital and by partnering early on with the design team (Gresham, Smith & Partners of Birmingham) and owner (UAB Health Services Foundation), were able to deliver an award winning healthcare project. The project consisted of renovations to the second and third floors of the John N. Whitaker Building in downtown Birmingham, converting it into the new Whitaker Clinic of UAB Hospital. The 64,000 square foot renovation converted existing space into high-end clinics and offices housing primary care, dermatology, podiatry and rheumatology clinics. The renovation included 80 exam rooms, waiting areas, a full laboratory, digital X-ray and an injection area for basic inoculations. The project also includes a connector bridge to the existing parking deck, an additional elevator, natural light in all patient care areas, sliding doors to maximize space in patient rooms and advanced technology in heating, cooling and lighting.

The team had to determine a user friendly, efficient design that would allow for easy patient flow and would maximize the use of space while also minimizing the amount of time needed to see each patient. The healthcare staff was moving to the new location, and the facility had a chance to do a reset on their operational approach to achieve maximum efficiency.  The question then was asked about staffing levels and ultimately how long it would take to see a certain number of patients each day. Everyone shared the same goals, which were to improve patient care, minimize patient waiting, and ultimately work a reasonable work day while achieving all of these objectives.   The Health Services Foundation, Gresham Smith and Partners, and Doster set out to test everything we could while still in the early design phase. Instead of one or two methods of user feedback the team decided to use a combination of many to reach optimal results.

As a team, the group used 3D models, focus groups, staff surveys, full scale mock-ups, interviews, evidence-based design, equipment studies for efficiency, value stream mapping, and time motion studies to determine the best design and implementation for the space.   The results were overwhelming and had buy-in from end users and administrators along the way.

Doster was involved with the project for two years prior to the start of construction. After every design change, Doster performed a pricing exercise for the Owner. Doster provided value analysis throughout the preconstruction efforts.  One example of these value savings is from the framing design of the exam room walls. The initial design consisted of full length transom windows at each exam room. The amount of structural framing required to facilitate this opening, along with the weight and force of the wood sliding doors below the window, would result in a significant cost to the Owner. Doster worked closely with the design team and Owner to come up with a solution that reduced the transom windows down to a size that allowed for ample natural light into the exam rooms, which significantly reduced the framing costs.  Another example of innovation was the decision to let the exam tables double as scales which eliminated one step in the data collection process.   Ingenuity at every step became a culture for the project and allowed for a sophisticated plan to become a reality. 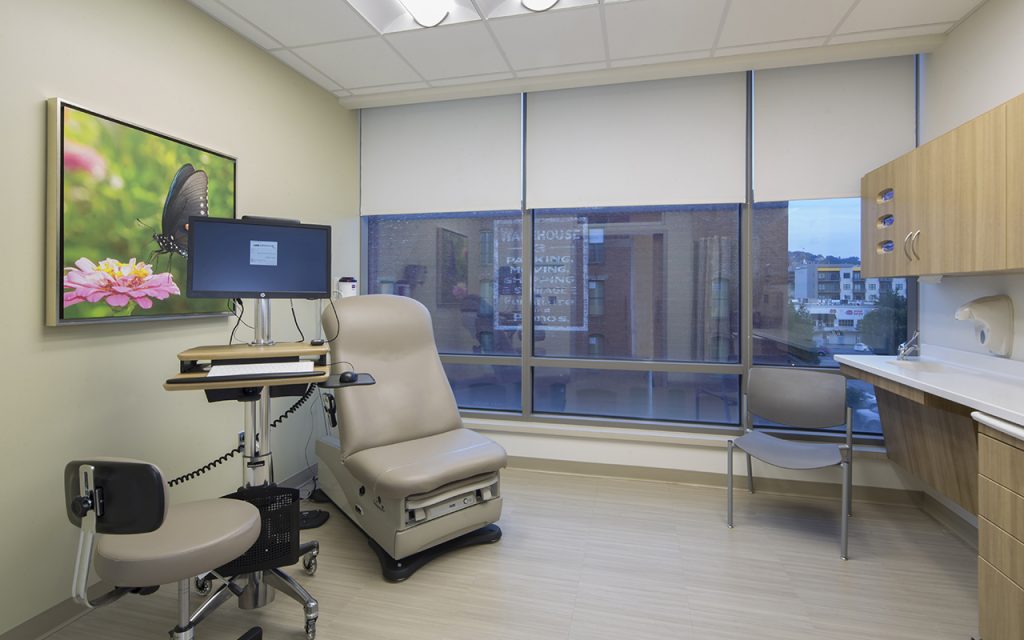 After construction commenced, Doster came up with many innovative solutions detailed in the narrative regarding quality, scheduling and logistics. Being a renovation project that relocated many office and clinics, Doster was also able to overcome some staff member’s (many of whom had been practicing at the same location for over 25 years) reluctance to move locations. According the Thalia Baker, UAB Medicine’s Executive Director of Primary Care and Development, “The Doster team, through many very interactive approaches, won over these reluctant physicians. From the very beginning of the project, they were open to after hour tours with our staff and even provided a large bin of hard hats. Our physicians felt a part of the project and soon thought that the move was the best idea ever. “

The teamwork with Doster vastly exceeded our expectations and went well beyond any of our prior interactions with partners in developing space across our Health System, said Thalia Baker, UAB Medicine, Executive Director of Primary Care and Development

Doster worked closely with the design team to identify long lead-time items in the schedule. The team focused on those critical items first. This approach allowed the team to release those key items earlier, thus preventing impact to the project schedule. Doster also worked closely with the subcontractor teams to facilitate prefabrication of as many components as possible. For example, the mechanical subcontractor prefabricated all of the overhead duct work during the demolition process of the project. This allowed them to have all of the major overhead ductwork run within several weeks of the demolition. This eliminated a significant amount of coordination of RFI’s and CO’s throughout the project. Additionally, through close coordination with the MEP engineers and subcontractors, the team was able to order all the new VAV’s for the construction project. This allowed even further gains in the construction schedule. Yet another example of prefabrication on the project included the plumbing contractor prefabricating all of the in-wall rough in assemblies for the sinks. This equated to a significant on-site duration reduction for the plumbing contractor. This also reduced the in-wall rough-in time, allowing the drywall contractor to begin hanging sheet rock within days of the framing scope being completed. 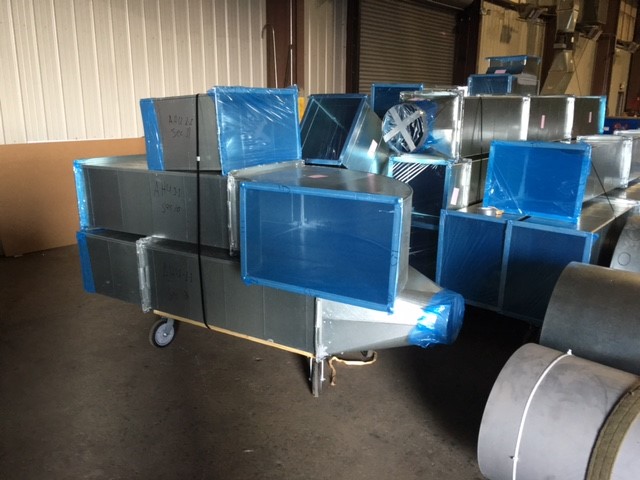 Baker said about the schedule, “As our project neared the end, a decision was made by the Health System Leadership to make a substantial change in the project, taking it from office based to hospital based space. This change created many, many challenges in our clinical areas. The Doster team approached this hurdle very professionally even though it threw a very large bump into the final timeline. While I complained about the change, they just went to work. The planning and coordination to make the change happen without delaying movement of clinics was extreme, although the Doster team never winched. Commendable.”

Doster, along with the design team at Gresham Smith and Partners, constructed full scale mock-ups of the clinic exam room spaces to allow doctors and staff to better visualize their future working space. This allowed for modifications to be made to benefit the work flow for both doctors and nurse staff. The mock-ups were constructed of light weight sign board and light gauge metal studs. Doster was able to make quick field modifications during the walk through to expedite the design and review process.

Thalia Baker, UAB Medicine’s Executive Director of Primary Care & Development said about the mock-ups, “Doster suggested that we create a ‘mock’ exam room and work team space in a vacant building near our site. The Doster team created this mock area and led every level of our care teams through the mock area to collect feedback. Doster also edited the mock area as we progressed to give team members a real-life feel for how counter height, exam space, door width, etc., would really function in our new space. Without this effort, which I know required much of their team’s time, our final space would never be as pleasing to our clinical team as it is today. Several of our staff actually submitted this work to professional associations on the clinical side for presentation at national meetings.” 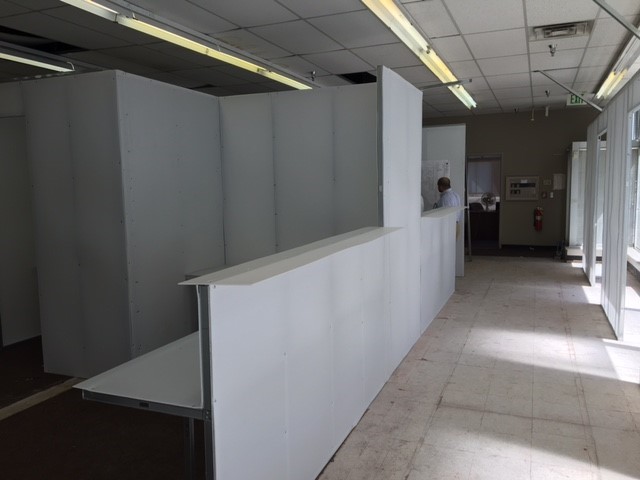 Our team also utilized PlanGrid, a mobile construction software giving builders real-time access to blueprints, punch-lists, daily reports and more. Our team used the tool to document and complete quality control items throughout the finishing portion of the project. Finally, the project was constructed concurrently on the second and third floors to lessen time impact of construction for the Owner. This allowed the subcontractor teams to remain on-site and ensured consistently staffed crews, which in turn allowed for consistent productivity and quality control efforts. 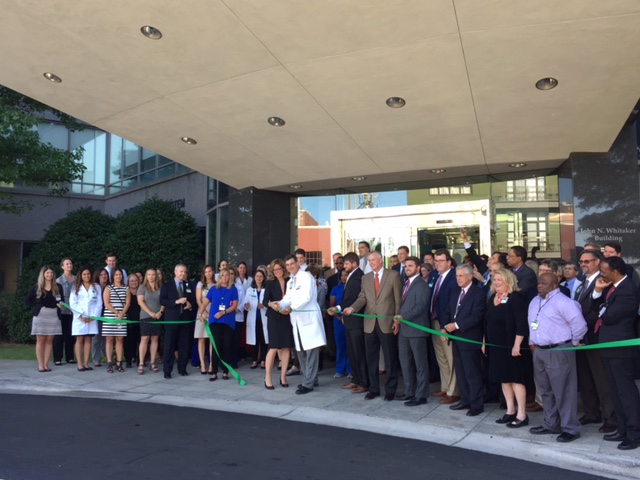